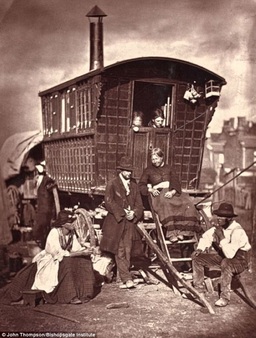 Life in the 19th Century

​ (1800 - 1900) was much different to life today. There was no electricity, instead gas lamps or candles were used for light. There were no cars. People either walked, travelled by boat or train or used coach horses to move from place to place. Many Irish people were extremely poor and lived in dreadful conditions. In the 19th Century Ireland experienced The Great Famine which was probably the most significant and devastating event in Irish History. Many people either died of starvation or hunger or emigrated to places like America or Britain.
Ireland was part of Great Britain during the 19th Century but many individuals and groups were attempting to change this. Some through politics and others through violence. Read on to find out more about what life was like for ordinary people in the 19th Century in Ireland. 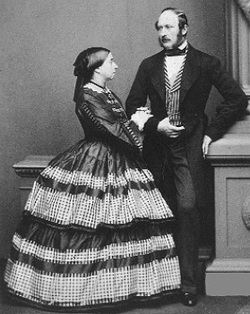 What were clothes like in the 19th Century?
​
People in the 19th Century dressed appropriately to their age, and position in society. This is a picture of Queen Victoria and Prince Albert of Britain. What do you notice about their clothing. How is it different to the clothes we wear today? 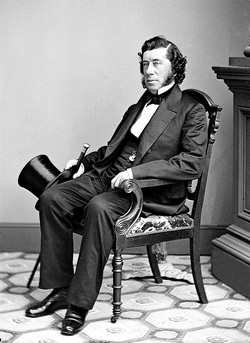 Most wealthy men wore a top hat and gloves and walked with a cane even if they didn't need one! They wore suits with tails at the back and a shirt and waistcoat. Around their neck they would wear a tie or scarf called a cravat. On thir feet they wore leather shoes or boots. Nobody wore denims, hoodies, high tops or trainers because they had not been invented yet!

When horse riding men would wear long boots and jodhpurs. They would also wear a special coat that fitted above their waist so that it was more comfortable to ride in. Women did not wear jodhpurs as it was still socially unacceptable for women to wear trousers. Instead they would ride 'side-saddle' using a specially designed saddle. 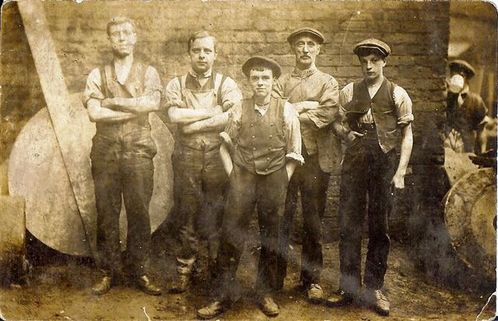 Workers in the 19th Century also wore suits but these suits were cheaper, of a rougher cut and coarser material and had to be hard-wearing because of their jobs.  They did not wear hats but wore caps instead. On their feet they always wore hard-wearing boots. In this picture on the left notice how the men have their sleeves rolled up. This was considered a demeaning exercise by the rich. Why do you think so? 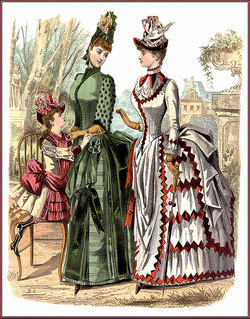 It was unheard of to see a woman's legs. Women wore long skirts or dresses which were heavily pleated. Rich women wore elbow length gloves and always carried an umbrella in the winter and a parasol in the summer. Under their dresses they wore up to seven pieces of undergarments designed to give their dresses a particular shape. It often took a very long time for women to dress and often they needed help from personal maid. 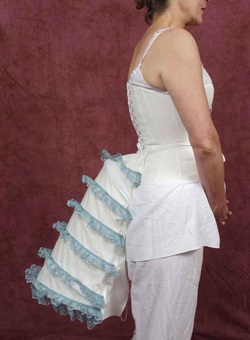 One unusual piece of undergarment that rich women wore was called a polisón. It is a type of framework used to expand the fullness or support the material of the back of a woman's dress. Polisóns were worn under the skirt in the back, just below the waist, to keep the skirt from dragging. Heavy fabric tended to pull the back of a skirt down and flatten it which was also uncomfortable when walking. 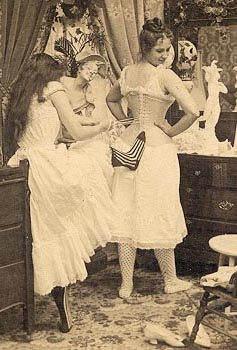 Ladies wore a corset to pull-in their waist. It was tightened at the back with laces and had to be done by another person. It was very uncomfortable and often difficult to breath or move but it was an important social convention. Can you think of any fashion trends that teenagers follow today that seem bizarre? 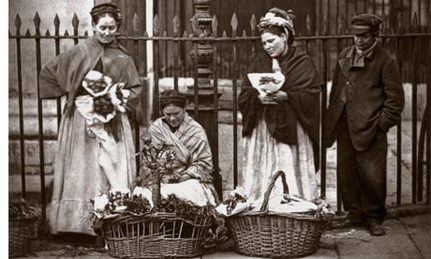 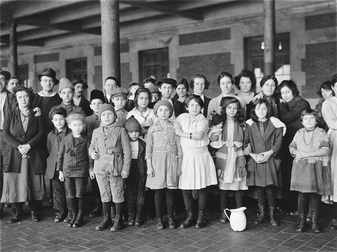 What was it like for children living in Ireland in the 19th Century?

In the 1830s children could wave at puffing steam trains on the railways. By the 1860s, they rode bicycles, watched airships, ate tinned food, and talked excitedly of the latest huge iron steamships. In the 1880s, lucky children could speak on the telephone and in the 1890s they could travel by motor car. 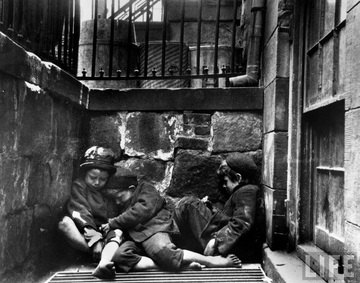 Life was not the same for all children during the 19th Century. The kind of life a child had in the 19th Century depended on its family. Children from working class families 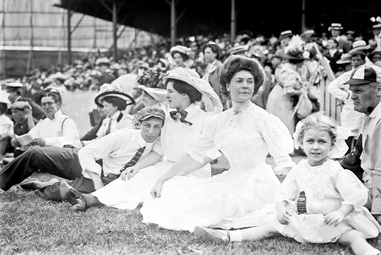 Children from rich families
Who went to school in the 19th Century? 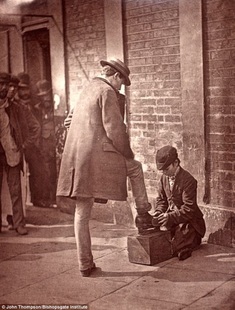 In early 19th Century Ireland, most children never went to school at all and grew up unable to read or write. Instead they were sent out to work to earn money for their families. Only the upper and middle class children went to school. Children from rich families were taught at home by a governess until they were 10 years old. Once a boy turned ten, he went away to private fee-paying school. There were very few schools available for girls, however, until near the end of the 19th Century.  Wealthy girls were mostly educated at home. Kylemore Abbey in Connemara was one of the first schools for girls to open in Ireland. But it did not open until 1920! 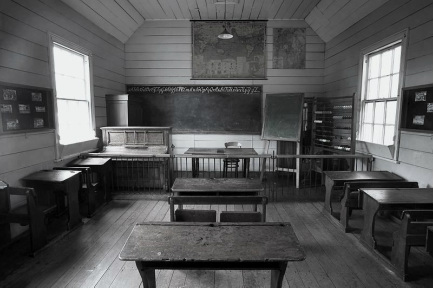 In 1831 primary education came to Ireland. This meant that children who wanted to got to school didn't have to pay for expensive education or go to charity schools. A National Board of Education was set up and a national system of primary schools began in Ireland. 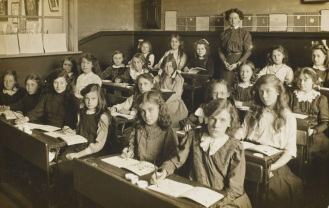 Typical lessons at school included the three Rs - Reading, WRiting and Dictation, and ARithmetic.  In addition to the three Rs which were taught most of the day, once a week the children learned geography, history and singing. The girls learned how to sew.

Schools did not teach PE in the way that schools do now. Children sometimes did 'drill' in the classroom. Drill was a series of exercises that were done by the side of a desk. 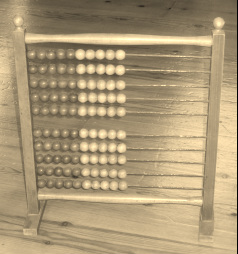 For maths lessons, children used frames with coloured wooden beads, much like an abacus.  Children learned how to multiply and divide using this apparatus.

The day usually began with prayers and religious instruction. Morning lessons ran from 9a.m. to 12p.m.  Children often went home for a meal, then returned for afternoon classes from 2p.m. to 5p.m.

Paper was expensive. Children usually therefore wrote on slates with chalk. After a lesson was completed, and the teacher checked their work, the students cleared their slates for the next lesson.

Older children learnt to write on paper. An 'ink monitor' distributed ink to the children, who used pens made out of thin wooden sticks with steel needles.  The pen had to be dipped every few words or it would run dry.
Working Children 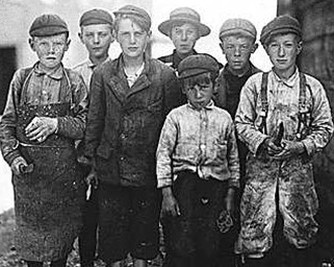 Children were often forced to work almost as soon as they could walk. This was not something new to the 19th Century as children had always been been expected to work for hundreds of years. Many were used as cheap labour. 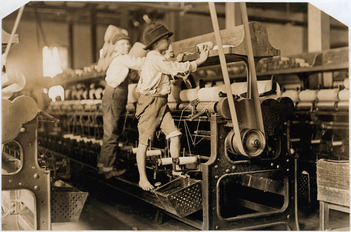 The lucky children got apprenticed in a trade, the less lucky ones worked on farms or helped with the spinning. When new types of work appeared with the development of industries and factories, it seemed perfectly natural to the owners to use children for work that adults couldn't do; Crawling underneath machinery or sitting in coal mines to open and close the ventilation doors.

Children worked long hours and sometimes had to carry out some dangerous jobs working in factories.

"I start work promptly at 5:00 in the morning and work all day till 9:00 at night. That’s 16 hours! We are not allowed to talk, sit or look out of the window whilst we work. The only day off from work I get is on Sundays, when we have to go to church." Girl aged 9

In textile mills children were made to clean machines while the machines were kept running, and there were many accidents. Many children lost fingers in the machinery and some were killed, crushed by the huge machines. 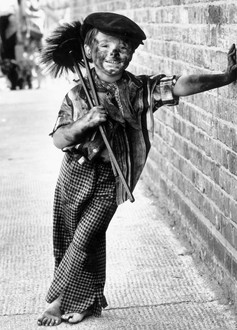 Chimney sweeping was a job children could do better than adults. Small boys (starting at the age of 5 or 6 years) would be sent scrambling up inside the chimney to scrape and brush soot away. They came down covered in soot, and with bleeding elbows and knees.

"I have two boys working for me. After work their arms and legs are bleeding so I rub them with salt-water before sending them up another chimney" Sweep Master

The chimneys were usually very narrow (in some cases as small as 30cm) and twisted. Children often got stuck or froze with terror in the cramped darkness - in these cases the Master Chimney Sweeper, would simply light the fire underneath to 'encourage' them to get on with their work. The work was dangerous and painful. Some boys got stuck and died of suffocation.

"I never got stuck myself but some of my friends have and were taken out dead." boy aged 8

In 1832 the use of boys for sweeping chimneys was forbidden by law, however, boys continued to be forced through the narrow winding passages of chimneys in large houses. 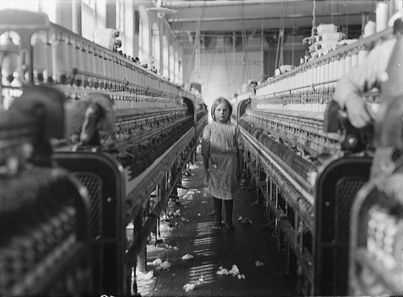 In match factories children were employed to dip matches into a dangerous chemical called phosphorous. The phosphorous could cause their teeth to rot and some died from the effect of breathing it into their lungs.

Why were children employed to work in factories? 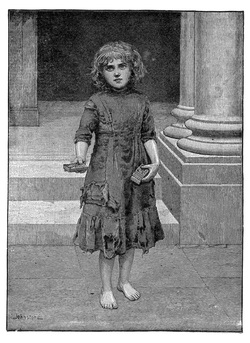 Thousands of poor children worked and lived on the streets. Many were orphans, others were simply neglected. They worked very long hours for very little money. To buy bread, they sold matches, firewood, buttons, flowers or bootlaces, polished shoes, ran errands and swept the crossing places where rich people crossed the busy roads.
What toys did children play with in the 19th Century? 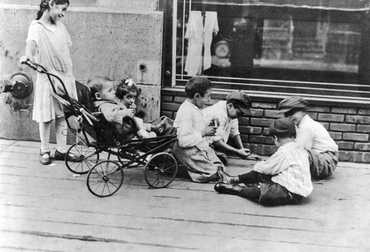 19th Century children had fewer toys than you have today. Poor families made their own, such as cloth-peg dolls and paper windmills. Children would save their pocket money to buy marbles, a spinning top, skipping ropes, kites or cheap wooden toys. 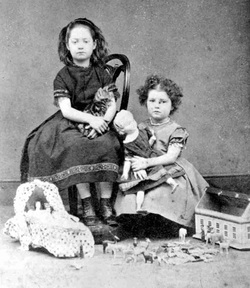 In rich families girls played with dolls and tea sets whilst boys played with toy soldiers and marbles. People became fascinated by toys that made pictures move. 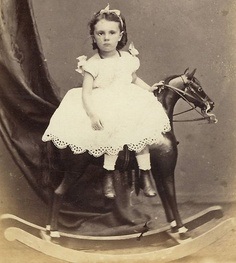 Children from rich families had rocking horses with real horse hair manes, and dolls houses full of beautifully-carved miniature furniture. Other popular toys for rich children included china or wax dolls for the girls and clockwork train sets for the boys.
What clothes did children wear? 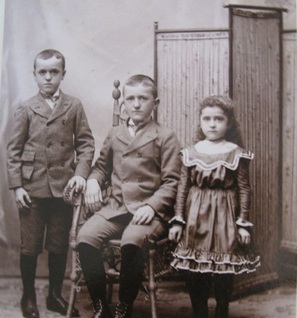 Children were often dressed like miniature versions of their parents. There were no hoodies or hightops. No skinny jeans, jeggings or flat-peaked baseball caps and definitely no moustache t-shirts or pants!

Girls often wore a protective cover over their clothes called a pinafore. The pinafore was a type of apron that was pinned over the dress and easily removed for washing. Buttons were frequently damaged with lye cleaning products, which was one reason why dresses were not laundered very often.